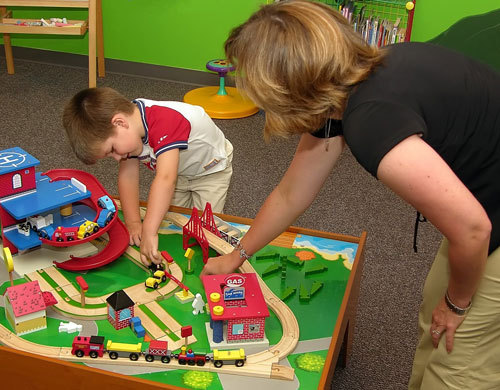 Back in the day, a kindergarten was a garden for children, a place where children could play, sing, paint, and pretend. Letters, numbers, and anything that smacked of formal schooling was minimized. Instead, kindergarten was intended to facilitate the transition from home to school, in a home-like setting.

Today, of course, kindergarten is less of a garden and more of a hothouse. At least in public schools, it’s a rare kindergarten that does not have a strong focus on letters and numbers. A child exposed only to the play-oriented children’s garden of old would arrive in first grade at a serious disadvantage. In most kindergarten classes there is still plenty of play, singing, and make-believe, but also a lot of literacy and numeracy.

Debate in early childhood education has largely shifted from the kindergarten to the pre-kindergarten. For a long time, programs for four-year-olds have resembled kindergartens of the past. Children are painting, playing with blocks, dressing up for make-believe, using sand and water tables, singing, and listening to stories.

In most states, pre-K is not available to all, and many children who attend pre-K do so as part of the federal Head Start program. A lot of attention has been paid to the question, “Does Head Start work?” For decades, the evidence that it does has depended on longitudinal studies of the Perry Preschool, the Abecedarian Project, and other small, colossally funded experimental approaches. However, evaluations of run-of-the-mill Head Start programs find a consistent and depressing pattern. Immediately after their Head Start experience, young children perform somewhat better on cognitive measures than do similar children who did not receive pre-K services at all, but within a year or two these differences fade away.

Seeing these outcomes, early childhood researchers began in the 1990s to experiment with ways to make Head Start and other early childhood approaches more effective. Numerous studies compared outcomes for children who were all in preschool, but who received different programs. In the mid-2000s, a large federal project called the Preschool Curriculum Evaluation Research (PCER) initiative evaluated a large number of programs using consistent, rigorous methods. This study added substantially to the number and quality of studies of preschool models of all kinds.

My colleagues Bette Chambers, Alan Cheung, and I have just completed a review of research on studies that compared alternative approaches to pre-K. We found 32 studies of 22 programs that met our standards. These studies were of exceptional quality; 30 of the studies involved random assignment to conditions. We mainly compared programs with elements focused on literacy (which we called “balanced” approaches) to those that did not have such elements (“developmental” approaches). The outcomes were striking. At the end of pre-K, children in the balanced programs performed better, on average, on both literacy and language measures. The literacy outcomes were not too surprising, because the balanced programs had a stronger emphasis on literacy. However, at the end of kindergarten, the children who had been in the balanced groups still performed at a higher level on both literacy and language measures.

Our review supports the idea that young children can benefit from literacy experiences, to learn letters and sounds, while they continue to play, pretend, draw, and sing. Keeping literacy out of the mix does not benefit children immediately or one year later.

I’d be the last person to want to take the garden out of kindergarten or preschool. Pre-K can still be fun, social, and interactive. But adding in a focus on literacy helps children arrive in first grade ready to succeed in reading. How can that be a bad thing?

The average wait time for processing your college transcripts is 30 Days. For questions regarding your Registry account, please contact info@thearizonaregistry.org.